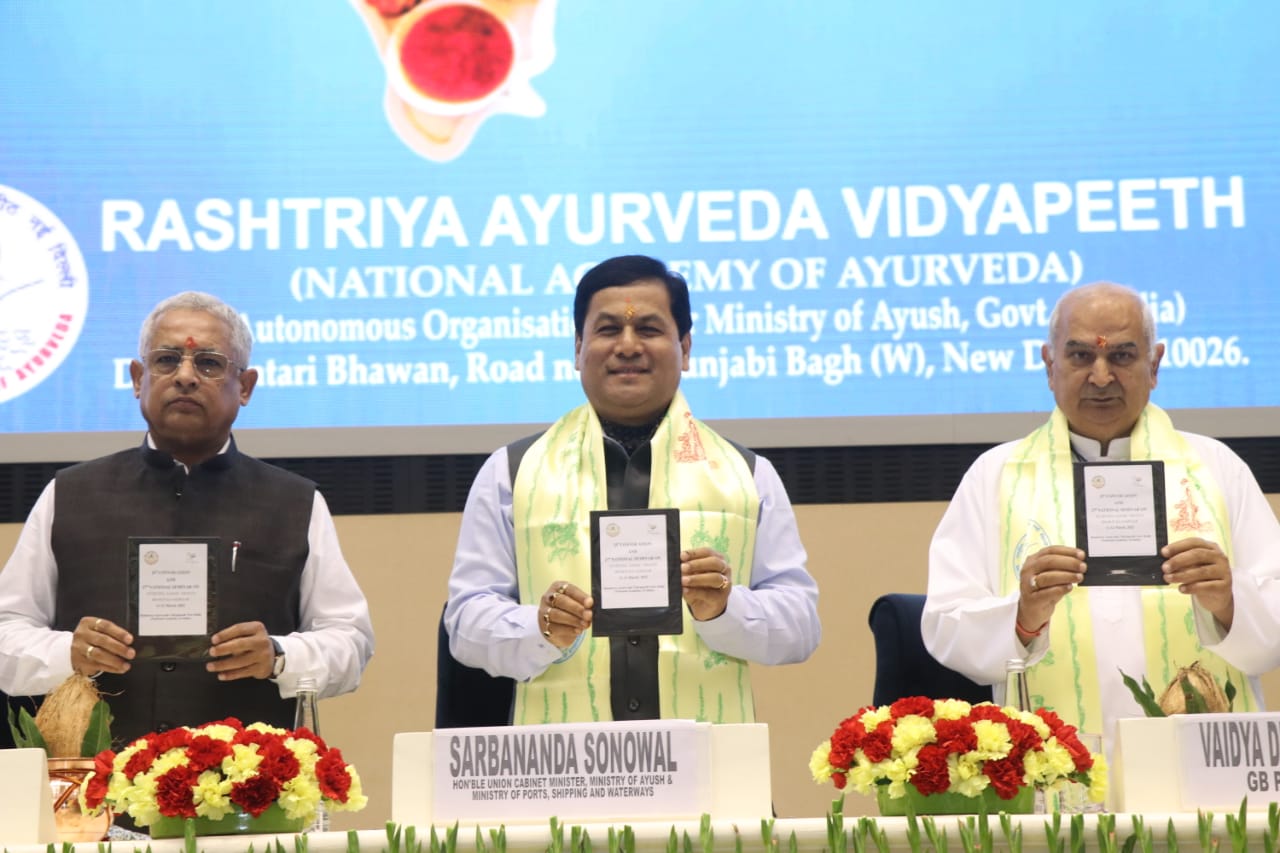 Web Desk Janadarpan: 25th Convocation of Rashtriya Ayurveda Vidyapeetha also held, saw 155 Vaidyas graduate RAV notified as Accrediating Agency for various courses to standardize Ayurveda education on a global platform RAV has also collaborated with IIT, Varanasi to start the PhD courses in Dravyaguna, Rasa Shastra and Bhaishajya Kalpana, Samhita and Siddhanta, Shalya, Panchkarma and Kaya chikitsa. New Delhi, 11th March, 2022: The Union Minister of Ports, Shipping & Waterways and AYUSH, Sarbananda Sonowal, ceremonially inaugurated the 25th Convocation ceremony of Rashtriya Ayurveda Vidyapeeth (RAV) held at Vigyan Bhawan today. The Minister also inaugurated a national level seminar on the theme of “Ayurveda Aahar - Swasth Bharat Ka Aadhar '' as part of the Azadi Ka Amrit Mahotsav on this occasion. The two day event - being held on March 11 & 12 - will provide the Certificate of Rashtriya Ayurveda Vidyapeeth (CRAV) to a total of 155 successful students. The next session of CRAV, called Shishyopanayana, will also be held on March 12. As many as 225 students will be inducted for the next session. Every year RAV undertakes the ambitious CRAV programme which follows the traditional method of learning i.e Guru-Shishya parampara - the cornerstone of RAV. The CRAV is trying to revive this rich Indian system which has been disappearing along with the traditional Gurukuls. RAV has also collaborated with the Indian Institute of Technology, (IITVaranasi) to start the PhD courses in Dravyaguna, Rasa Shastra and Bhaishajya Kalpana, Samhita and Siddhanta, Shalya, Panchkarma and Kaya chikitsa. The Ayush Minister also conferred the “Lifetime Achievement Award '' to Dr Subhash Ranade and Vaidya Tarachand Sharma for their outstanding contribution throughout their life for promotion and propagation to Ayurveda within India & abroad. The FRAV award was also given to Vaidyas who have been working in Ayurveda and providing patient care for the well being of the society. Speaking on the occasion, the Union Minister, Sarbananda Sonowal, said, “To realize the full potential of Ayurveda, we must continue to move forward to provide effective patient oriented outcomes. We remain committed to promote, propagate and provide all support to help Ayurveda move beyond its glorious past - to reach the epitome of patient care & well being. Our traditional healthcare system can help India reach the SDG 3 ‘Health for All.’ Here, also, the role of Ayurveda is immense. The vision of Honorable Prime Minister Narendra Modiji is to take Ayurveda, along with other traditional forms of medicines, towards improving human health & enrich the well being to build a healthy India.” The RAV has also been notified as “Accrediting Agency” for various courses which are not covered under any regulatory provision in the country and abroad. The scheme was launched to promote, propagate, standardize & bring in the quality education in Ayurveda. Subhash Ranade is a leading academician and physician in the field of Ayurveda. He is the author of 155 books on Ayurveda and Yoga. He has worked as Prof. and Head, Dept. of Interdisciplinary School of Ayurveda and Prof. and Head, Dept. of Ayurveda Pune University and Principal of Ashtang Ayurveda College, Pune, India. Vaidya Tarachand Sharma has been serving Ayurveda since 1967 and has worked in various Ayurveda institutes and has been awarded with various awards. He is an expert in Nadi Visheshagya (Pulse Experts) and has also written about 21 books on Ayurveda. RAV has been functioning since 1991 with financial assistance from the Government of India. The objectives of RAV is to promote the knowledge of Ayurveda, undertaking academic works related to Ayurveda, conducting training programmes including Teachers’ Training Programmes, Continuing Medical Education, Community Health Officers (CHO) training programmes and other activities. Ayush Ministry has notified RAV as an accrediting body for those courses which are not covered under IMCC Act, 1970 or any other regulations. RAV has formed a body named Ayurveda Training Accreditation Board (ATAB) for the purpose.