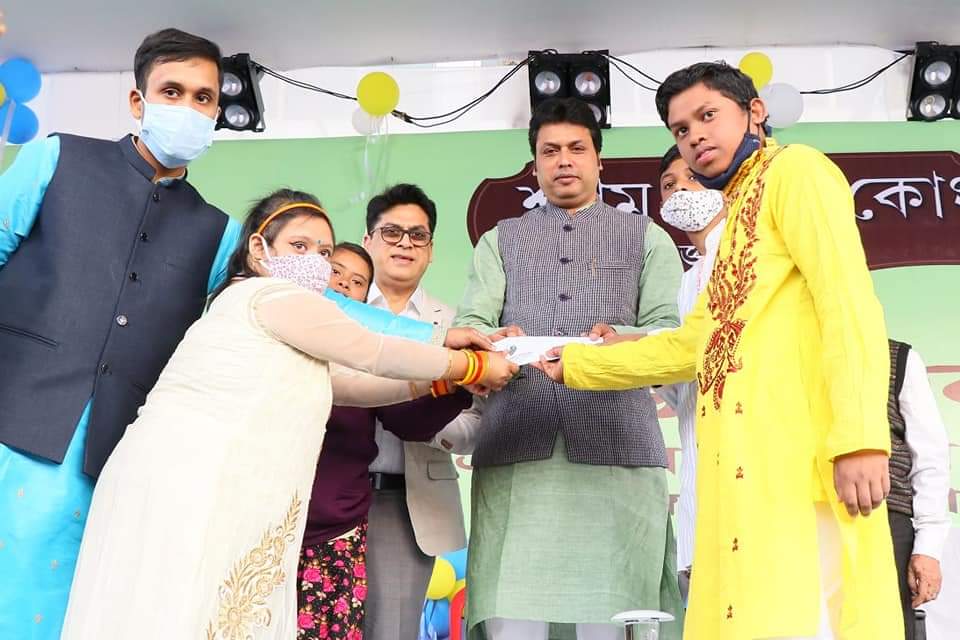 The government is committed to build a prosperous suitable future for children: Biplab Kumar Deb

Agartala: Dec 26: Mothers have a pioneering role in shaping their children's ideal lifestyle and positive character. In addition to reforming and cultivating traditional culture, children need to be brought up in a modern system. Chief Minister Biplab Kumar Deb said this while inaugurating the 33rd Children's Fair of Agiye Chalo Sangha today. Today, on this occasion, the Vidya Welfare Society was awarded to two young athletes for their work for the specially able students. Umakanta School Tribal Residential Students are provided with Sporting Goods. Speaking on the occasion, the Chief Minister said that the government is committed to build a prosperous suitable future for children and the government is working towards this goal. Mothers need to be more careful in shaping their children's habits and positive character. It is possible to arouse curiosity in the minds of the children by placing various traditional pictures including the tourist centers of the state in their minds. This will make the child more aware of the thought of asking about something.The Chief Minister said that the clubs of the state are working hard to raise the awareness of the society. The Chief Minister urged the clubs to get more involved in social activities in the coming days. Speaking on the occasion, Sumanta Gupta, General Secretary of the club, said, that the government is working to increase the participation of women in sports and social sector by creating a specific framework. In this case, other steps have been taken including formation of women's cricket team. After the program, the Chief Minister visited the gymnasium of Chalo Sangha.Among others present on the occasion were Nandi, President of Shilpa Samajsebak Rupak Saha Club, and Councilor of Ward No. 32 of Agartala Municipal Corporation.