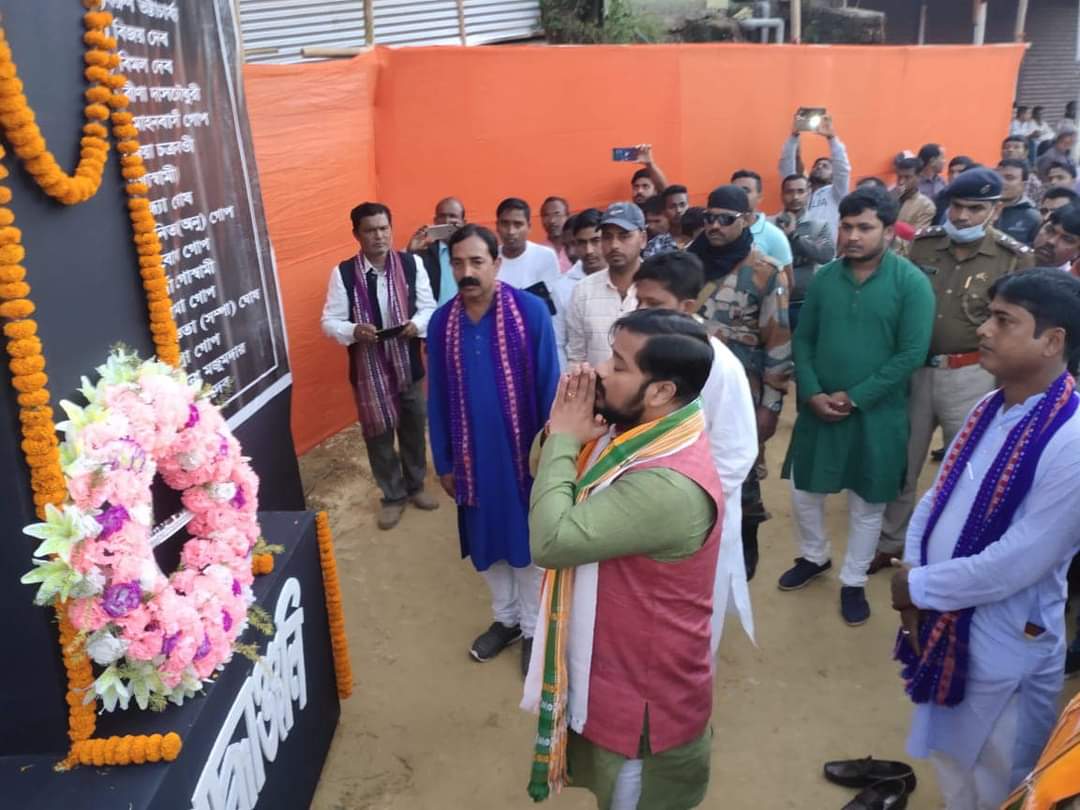 Agartala: Dec 12: A commemorative meeting was organized at Sonartari Mukta Mancha on Sunday in connection with the horrific massacre of 12 December 1996 in Kalyanpur. We have been able to restore democracy and establish the rule of law in the state after many fresh lives, starting from children, were sacrificed during the long 25 years of left rule in the state. Minister for Information and Culture of the Tripura government Sushanta Chowdhury made the remarks while attending a commemoration meeting of the 25th Martyrs' Day held at Sonar-Tari Mukta Mancha in Kalyanpur. At that time, the CPIM-backed militants, who were sitting on the throne of the state, carried out a surprise attack in the villagers of Kalyanpur Bazar Colony late at night. And the air was stunned by the sound of gunfire from these left-leaning militants. A total of 24 innocent young people, from newborns to women, were brutally massacred by the militants. Paths in Kalyanpur Bazar Colony area turned red with blood. Not only is the air of nature becoming heavy, houses are being set on fire. As a result, many domesticated animals have died and many have been injured in this hellish incident, the calculation of which will not be possible in the pen. On the 25th anniversary of that horrible black day, a Martyrs' Day and Remembrance Rally were organized on Sunday 12th December at 3 pm at Sonar-Tari Mukta Mancha in Kalyanpur. Minister for Information and Culture of the Government of Tripura Sushanta Chowdhury was present as the chief guest at the gathering. Pinaki Das Chowdhury, MLA of Kalyanpur Promodnagar, Soumen Gope, and Chairperson of Kalyanpur Panchayat Samiti were also present. The rally was presided over by Vishnu Dev, BJP state committee member Hari Shankar Pal and general secretary of BJP's Khowai district committee. Information and Culture Minister Sushanta Chowdhury and other leaders laid flowers and wreaths at the temporary altar near the Martyrs' Remembrance Meeting. At the same time, he paid homage and devotion to the family members of the martyrs with winter clothes. "Our Bharatiya Janata Party is a democratic government. We have been able to establish proper rule of law in the state and restore democracy”, said Minister Sushanta Choudhury. He further said that the government of the Marxist Communist Party of India had perpetuated terrorism, murder and rape in the entire state during the then Left period. He also stood on the stage of Martyrs' Day today and raised the issue of free immunization for all in the fight against the current epidemic of Corona.