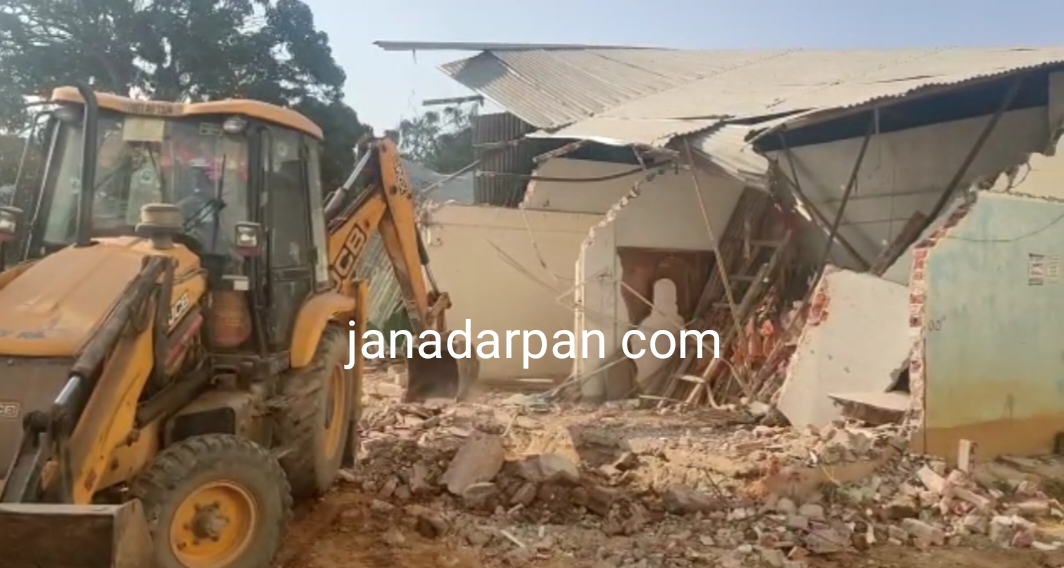 Agartala: Dec31: Like the rest of the state, the Agartala Municipal Corporation on Friday demolished the Tripura Government Employees Federation office in the Jackson Gate area. They also evicted the hawkers stalls on the side of the local road. Police, paramilitary forces, including TSR, were deployed in the area to prevent the hawkers from staging any protests. The AMC task force arrived early morning in the name of the operation. First, the office of the employees' federation was demolished. The nursery was later evicted along with some hawker traders from the local area. In this regard, MLA Ashis Saha said our reporter that in April 2017, the office of the Federation of Government Employees was established in the Jackson Gate area from the post office Chaumuhani. On Dcember 28 the corporation authorities hung the notice and were asked to leave the holding land within 3 days. MLA Ashis Saha replied that he was out of station and he would come and fix the problem in few days. But the surprising thing is that one day later, the corporation authorities came and demolished the office. It was the office of government employees. If there was a problem with the staffs, this office would handle it. The leaders of this office have been fighting for the employees for a long time. And ruling party MLA Ashish Saha used to sit in this building. MLA Ashish Saha consulted with advocate Chandrashekhar Sinha and submitted a petition to the High Court and the petition is under trial. He accused that it is a form of Violence. Hawkers said that the sudden operation of the corporation without leaving any permanent business space is the identity of inhumanity. Swapan Roy, owner of the local Good Luck Nursery, said the corporation administration came this morning and took away tree saplings worth more than Rs 3 to 4 lakh. He said that a few more families like him are brought up in this nursery. The eviction was led by Shailesh Kumar Yadav, the arrogant commissioner of Agartala Municipal Corporation.